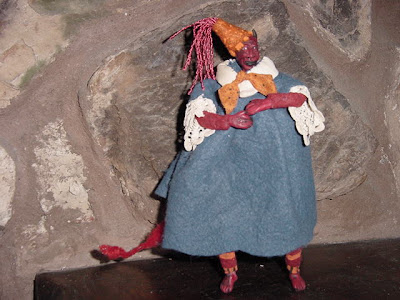 As the legacy of the American Folk Art Festival continues this year so do the expectations for something new, different and exciting to see or do at the show. That will be fulfilled this year in several ways. Several new artists, and dealers will joining the group of past participants. It is also the hope and desire to have many examples of found folk objects from different areas of the home, decorative items as well as useful ones. Since we are sometimes years removed from the purpose of an object it is often times a mystery as to what the object is, or the purpose it might have been intended. That thought never stops me, however, as I never look at what something was intended to be, but only the potential of what it could be become. Other Festival artists share this opinion too.

This year plants will not only be props, but also decorator pieces when they are artistically placed in antique found objects, by antique dealer Thomas Kurth, who will participate for the first time this year. After an absence, the rugs and primitive antiques of Jane Santucci will again make their appearance at the festival. She is in business in San Anselmo and welcomes the idea of showing her wares in our area. In fact a variety of dealers and artists that have found antiques and have created works of art will inspire the mind and the imagination of many tastes. As we get older we should always assume to be inspired and learn to expect and embrace it. Something new this year will also be the beautiful old world illustrations by Melissa Garden Streblow. They are reminiscent of old medical book illustrations. Her subjects are varied, from plants to animals, on land and water. She has developed an illustrated color book for children.

There is more to come and I will share in future posts, as the show slogan states.......prepare to be amazed!
Posted by Tinsell and Whimsy at 11:57 PM

Sounds AMAZING!!! What a line up. Hope to be there as the doors fly open : )